The following works were selected from 420 entries.
Same as last year, there is an Encouragement Award given by consensus of all judges. 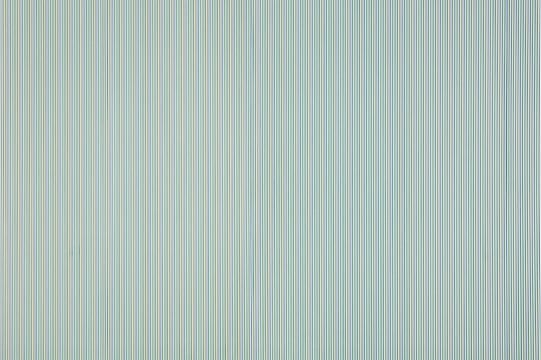 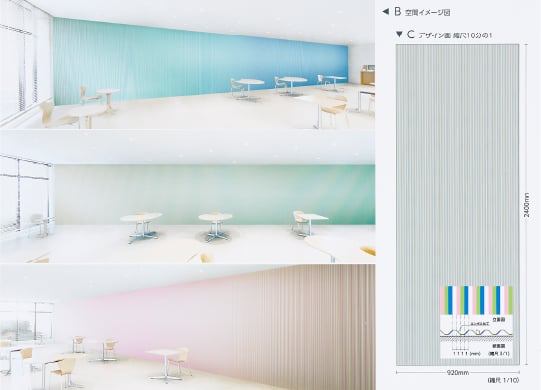 The wall is designed so that color and light change in response to people’s movements. The recesses and ridges of the embossed surface are painted in 4 different colors, which causes the wall to change color depending on the viewing angle and creates various gradations as people move about the room. If used for coffee shops or lounge areas, differing ambiances based on brightness or sedateness can reside in the same space, which makes it fun and possible to select where to sit based on one’s mood at the time. The idea is to create a space where the ambiance changes as people come and go step by step, by using a changing graphic as opposed to a static graphic. 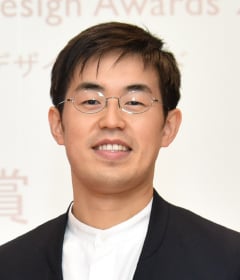 The wall itself does not move, but since what people look at and feel is constantly changing, I thought that something like this would be fun. What I have done is to express the changes you see in the natural landscape on wallpaper. I am very excited about winning this award.

Nao Taniyama
This design expands the role of wallpaper, which is understood as something static, by incorporating how people think and act. The artist has done with wallpaper what Yaacov Agam does so to speak, but modern technology can turn that into a building material. The work has tremendously great potential.

Ryosuke Uehara
Amazing idea! The artist was conscious of the space right from the get-go and has superbly transitioned his concept from the macro to the micro level. In his shades, he has created a minimalist design that has Japanese overtones but would be understood around the world. I initially concerned about technical difficulty but I have since heard that it is feasible, so I definitely would like to see this made into a product.

Yoko Ando
The artist has understood concept of the Award perfectly and created a design that “would be fun if it existed”. The concept is incorporated in the work exceptionally well without coming overbearingly to the forefront, so objectivity has been retained. That distance, which the artist has established shows his personality and I rated that point too.

Shosuke Yasuda
Because the artist has carefully arranged his colors across the recesses and ridges of the embossed surface, the work looks completely different color-wise depending on your angle of view. Our company would like to use our best techniques and pay effort to turn this color-changing trick into a product. 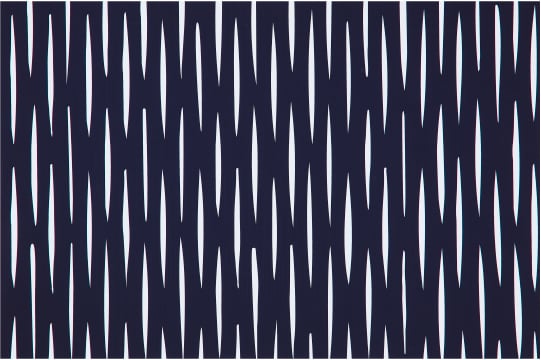 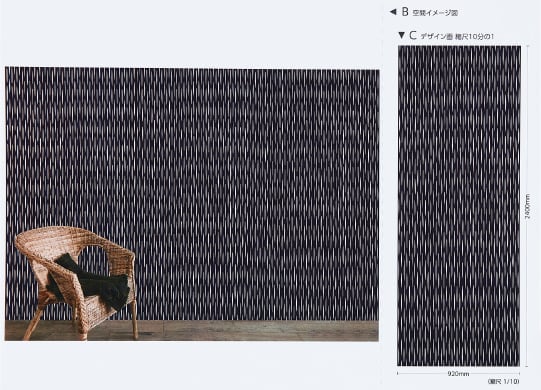 What the artist has aimed for with his wallpaper is an ambiance that stimulates your perception. When seen from afar, it looks like an intricate pattern that simply repeats itself, but from up-close, you notice the subtle differences between the individual patterns. Though seemingly arranged in orderly cadence, each of the patterns is actually of a different shape. He, in fact, carved each pattern from a woodblock with a chisel and arranged them side by side – more evidence of the value of analog work and actions while lockdowns continue. Being boxed up in a single room has inspired him to pursue a visibly primitive presence that bears all the markings of something handmade. 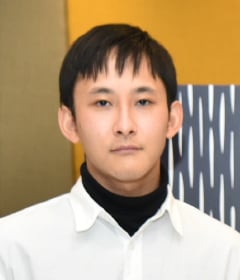 Though it looks like a bunch of lines assembled into a pattern, each one actually has a different shape. Wanting to evoke a sense of nostalgia and warmth, I went with the analog process of hand-carving woodblocks to make this work. This being my first time to have participated in this competition, I am very grateful to have won this award.

Nao Taniyama
This work is strange – in a good way. It seems old yet new at the same time. It teems with the sensitivities of a younger generation. You can see the depth from many angles.

Ryosuke Uehara
The work presents itself well as a design. The chiaroscuro relationships in the patterns invite a variety of interpretations. It strikes me as an unlikely design.

Yoko Ando
Having been created by carving block prints by hand, the hand-made component is clearly evident. His choice of colors and other attributes is warming, relaxed and pleasing. 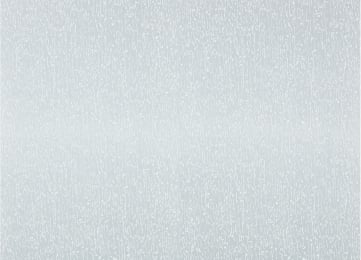 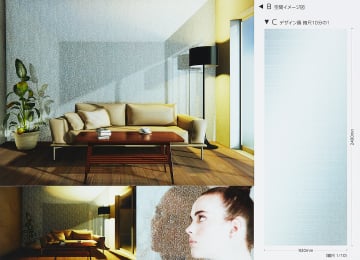 Since I study architecture and wallpaper is a different field, I looked at this contest as challenging. With this work, I tried to express how rain on a window can change an ambiance using trickles in slightly glossy and matte whites. This experience has motivated me to work harder with design.

Nao Taniyama
When looked at up-close, you can see how the artist has grasped wallpaper’s role in creating ambiance. The work has a kind of duality in that he has expressed an event along an immobile axis – wallpaper in this case. It is a novel idea. 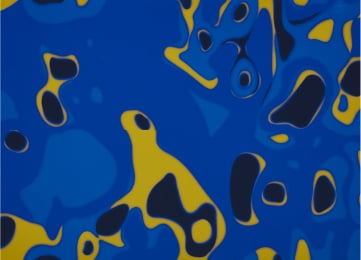 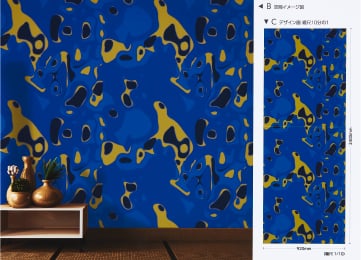 Shion Minamisawa：We tried to make flat wallpaper look layered, ornate and weighted. One of us is a student while the other has a job, so, in making this work, we each filled in the holes that the other didn't see.

Kounosuke Sawada：We were looking at how Japanese ambiances were changing over time and came across the karanuri technique used in Tsugaru lacquering, which we took as our motif. We wanted to make an enjoyable work and honored to have achieved this result.

Ryosuke Uehara
The work stands out as a design because the complexities it beholds demand sensitivity. Perhaps because lacquer is used as the motif, it is novel yet somehow remindful of things Japanese. The rich expression stirs the imagination. 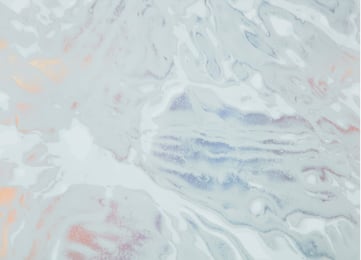 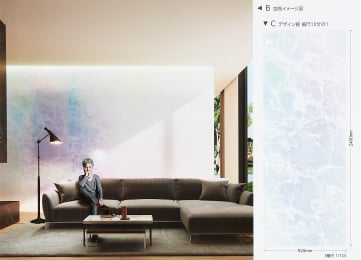 Takeshi Matsuda：We proposed an ambiance that transforms under changes in lighting and people’s movements, using wallpaper. It overlays multiple layers of transparent and nontransparent materials. The important part of this experience was that all of us work for the same design company and sought an idea and technique that one person could not do alone. What we came up with can be viewed and experienced differently by everyone.

Yoko Ando
The artists have successfully combined differing materials to create a colorful complex feeling. The work is highly deserved of this reward for the way that the relationships between people, time and wallpaper are consciously incorporated into spatial ambiance. 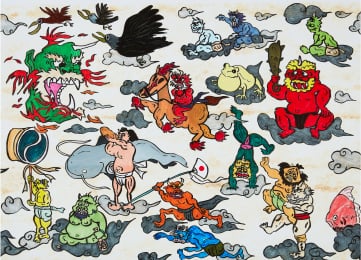 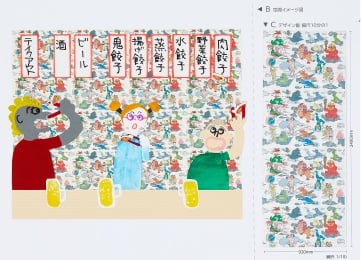 I emphasized a busy composition, bright colors and lively motif. Since I do not use a computer software to draw pictures, I never thought I’d ever win such an award. It has definitely motivated me to try various things.

The Sangetsu Award was created as a special award that is given to one finalist work.
It is voted on, by the employees at Sangetsu, based on which entry they want to turn into a product. 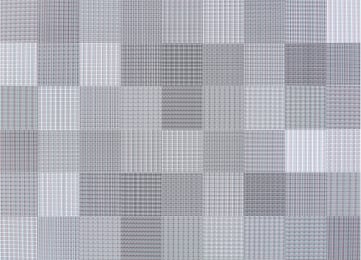 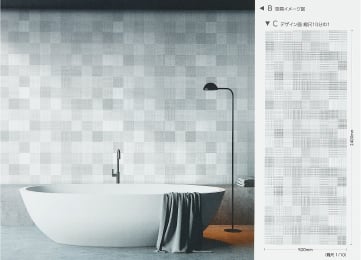 I work with lettering for books, magazines and so forth as a graphic designer. I entered the contest to try my hand at spatial design because it deals with a lot more materials. I settled upon this work after experimenting with over 100 fonts to see how it might be possible to apply the different ways letters look because of repetition and spacing to design.

“Finalist works” refers to the works that advanced from the initial screening to the final round of judging. 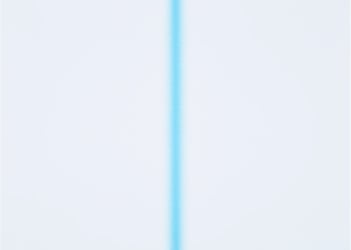 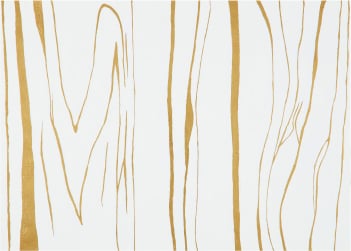 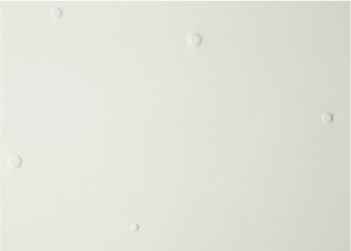 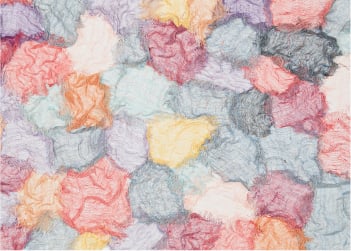 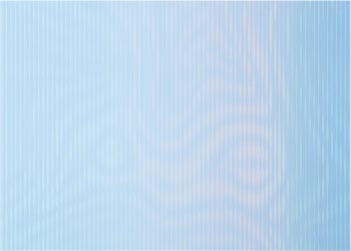 Design as an act means to me to continuously and straightforwardly think about the people out there. That was the perspective I maintained in judging works at this year’s competition. If I were to divide the entered works into categories, there would be those that focused on concepts and those that focused on events. Overall, the quality was very high, so much so that time and time again in the judging process, I was left with my jaws wide open. I welcome everyone to join me next year and beyond in pondering long and hard about how design can be used to improve communications and make a better world.

When doing graphic work, you typically want to put forward some concepts then go about making your point. That is not the case with wallpaper. You have to be more straightforward and natural with your design. That said, I had the pleasure of judging award entries for a second year in a row. With the Covid-19 situation hanging over us, I was a bit concerned that works might be by and large toned down, but quite to the contrary, the level of completeness as designs was high and I had trouble ranking the finalist works and much more so picking winners. This contest is getting bigger year after year, so I hope to see even more challengers next year.

This was my second year in a row to serve as a judge. The contest once again attracted works with strong future potential, as many looked carefully at how wallpaper can be used in places where people live, work and play. The entries drew the attention of Sangetsu who actually makes wallpaper as a business. I enjoyed the judging process because I got the impression that overall the works were of a higher level of quality and there were lots of wonderful ideas. I look forward to exploring wallpaper and spatial ambiance with everyone.

This contest began in 2017 out of the desire to get people that have nothing to do with wallpaper design to enter works and become more interested in wallpaper. For this fourth year, there were 765 entries and 420 submitted works. Though 420 works may not seem like enough when you think about spreading interest in wallpaper design around the world, every year has seen a tremendous improvement in the quality of proposals, designs and concepts. In the beginning, there were works you would expect to see. But this year saw many works that went beyond one-sided ideas with designs and that developed the roles that wallpaper plays in a room. Numerous entries, though they did not make the final round, were truly wonderful. In that sense, wallpaper design has grown by more than 420. Going forward, I want to continue this contest with a wider range of contestants and draw the interests of students and others of the younger generation.

The final round of judging and award ceremony were held on December 9, 2020.

Short movie of final round of judging and award ceremony

Report of final round of judging and award ceremony

On December 9, 2020, the final round of judging and award ceremony for the 4th Sangetsu Wallpaper Design Awards were held at Sangetsu’s Shinagawa Showroom. Because of the precautionary measures against Covid-19, the finalists, judges and members of the media who attended this fourth event were somewhat inconvenienced by the various changes that were made for the new normal. 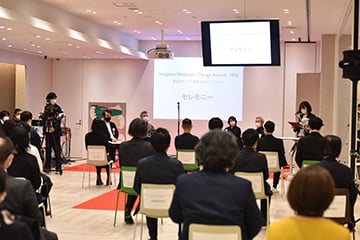 The biggest changes were made to the presentations that the finalists give as part of the judging process for determining winners. This included not crowding the event with people, allowing participants to attend remotely and having videos submitted in advance and Q&A done on the day of the event.

The videos varied in style but were spectacular nonetheless. They were loaded with information and personal tastes that ranged from interview formats with background music to descriptions of the production process, and dramatic portrayals where the artist him/herself talks about the work in third person. In addition, contestants skillfully explained their concepts and intentions by fielding questions while looking at an actual size printout of their work. 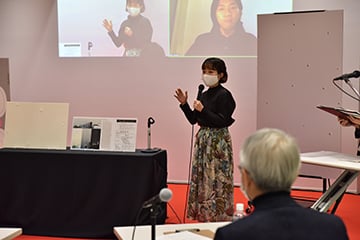 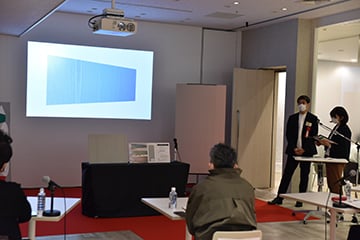 As was heard from the judges, the works entered this year were of markedly higher quality, especially some eye-opening proposals that were demonstrably conscious of spatial ambiance. Continuing in this direction will only make the contest better.

Because of Covid-19 concerns, room capacity was limited and photoshoots were shortened. Sadly, there were a lot of restrictions that took away from the clear skies. It is hoped that even more interest will be shown in wallpaper at the next Sangetsu Wallpaper Design Awards. 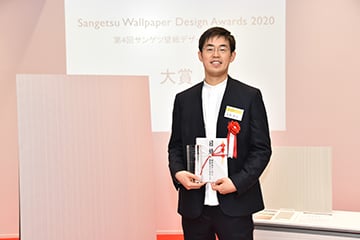 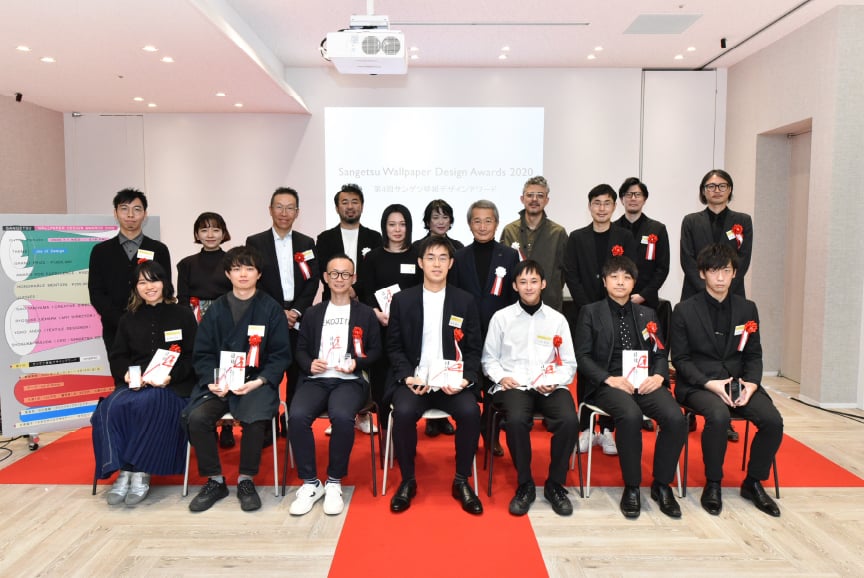